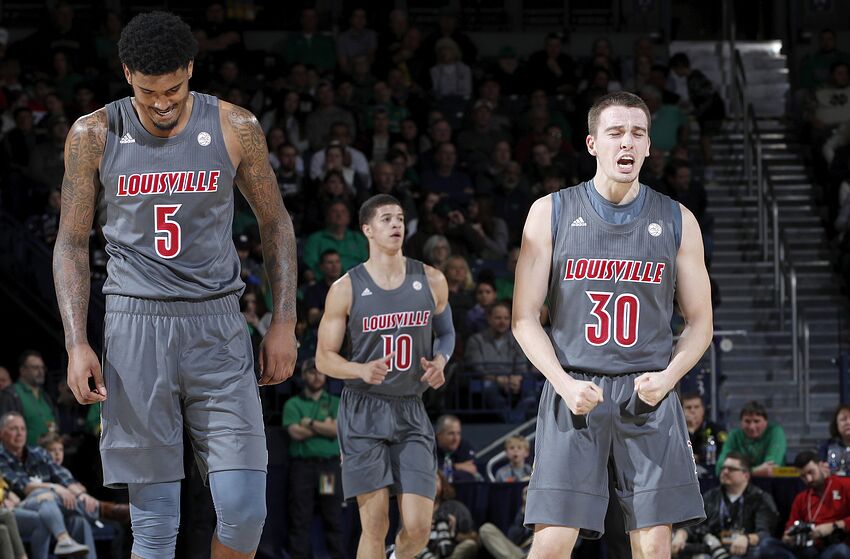 SOUTH BEND, IN - JANUARY 11: Ryan McMahon #30 of the Louisville Cardinals reacts in the first half of the game against the Notre Dame Fighting Irish at Purcell Pavilion on January 11, 2020 in South Bend, Indiana. (Photo by Joe Robbins/Getty Images)

Louisville basketball nearly gave away another victory in the second half but held on to win over Notre Dame.

Louisville basketball’s mental fortitude had been called into question following their lackluster three-game stretch that included two losses to Kentucky and Florida State and a game that was far too close against Miami. With Notre Dame desperately needing a statement win, they were hoping that Louisville’s issues would linger into Saturday’s matchup.

Jordan Nwora got the Cards going early with eight early points while Notre Dame’s John Mooney, the nation’s leading rebounder, poured on eight points and six rebounds in the opening 12 minutes of play and finished with a double-double in the first half. Ryan McMahon would follow behind Nwora’s hot start scoring 12 of his own points, doing so on a combination of three-point shooting and jaw-dropping plays at the rim.

Overall, Louisville’s defense was sensational in the first-half setting the tone of the game as they held the Irish to just 24 points on 11/35 from the field and two of 13 from three. Louisville’s guards did a great job of keeping TJ Gibbs and Prentiss Hubb out of the paint, holding them to just four points combined on two of eight shooting.

I wrote coming into the game that keeping Notre Dame’s guards from taking advantage of the Louisville defense was going to be crucial, and through the first half, Louisville showed a constant willingness to do the little things in order to win.

A different Louisville team showed up to play in the second half as Notre Dame head coach Mike Brey made a key adjustment substituting Dane Goodwin in for Juwan Durham and playing small. That led Notre Dame on an 11-1 to start the half, putting Louisville’s lead at just two and of course, bringing up all the questions about Louisville’s toughness.

Notre Dame started this game two of 13 from deep but started the second 3-of-5. What Louisville thrived at in the first half quickly began to slip away as the guards of the Irish started to take control.

Louisville was outscored 31-17 second half behind the play of Dane Goodwin, who provided 11 second-half points and 13 from TJ Gibbs, and eight total threes from the Irish.

Much like we had seen throughout the majority of the season, Louisville once again struggled to find consistent scoring from someone else not named Jordan Nwora. Sure three players finished in double figures, but Louisville had to find a way to squeak by a team who really hasn’t been that good this season.

Louisville’s bigs disappointed in a matchup against John Mooney that was crucial to the outcome of the game. Steven Enoch had possibly his worst game as a Cardinal going one for eight from the field while being rendered useless on the defensive side of the ball.

Malik Williams provided good minutes to Louisville defensively but allowed a lot of rebounds to get to the Irish that probably shouldn’t have been while he struggled to do anything offensively.

As ESPN said on the post-game show, Louisville played at a level that was “just enough” to win but not good enough to put away a team when they had the opportunity. When Notre Dame began to climb back into the game, the Cards essentially gave them the keys to the car and it almost cost them the game.

Notre Dame gained the lead and kept it for a majority of the second half, but thanks to Nwora and a few big three’s from Dwayne Sutton, it came down to the final possession. Louisville’s defense kept the ball moving and ultimately forced John Mooney into a terrible look that sailed over the rim and ended the game.

It wasn’t pretty and I don’t think many questions were answered, but Louisville showed enough resiliency to get it done.

A win on the road. No feeling like it!!!#GoCards pic.twitter.com/GLJSFygdXN

Game MVP: Jordan Nwora was sensational for Louisville, giving them a game-high 20 points on seven for 15 shooting while going 50 percent from three. I thought he played with great intensity for a good chunk of the game and even when he missed shots or made a bad decision he stayed locked in and it paid off.

The other big thing that I walked away from this was having seen Nwora provide some on floor leadership. I know that Jordan is a leader for this team considering his skill level and experience at Louisville, however, he is without question a quiet leader.

I saw a vocal player who wanted to take charge of his team when they were struggling. Louisville didn’t necessarily respond, which I’m not exactly sure how to feel about. But I love seeing the potential ACC Player of the Year showing ownership of his team.

Game x-factor: You could make the argument that Ryan McMahon was the x-factor for Louisville, considering his barrage of three-pointers that pushed the lead to double-digits in the first half. In the second half, he came back down to earth a bit more as Dwayne Sutton turned it on for Louisville on both sides of the floor and on the glass.

Sutton was three for 10 at one point in the second half before he confidently stepped into two three’s that helped push the lead in Louisville’s favor in crunch time. He played a ton of minutes and despite not being hot on offense was big on the glass, grabbing 14 rebounds while giving Louisville double-digits for only the eighth time this season.

When Louisville got down you could literally watch as Sutton willed his team to victory. Sutton was the primary rebounder for Louisville, even at 6’6, helping the Cards to limit the damage from Mooney on the glass.

Without the double-double from Sutton, and especially the two late three’s, Louisville doesn’t win this game. As Corey Alexander said on the broadcast, Sutton has to be a 10-plus point scorer for Louisville moving forward. Defining moment: Louisville got down by as many as four in the waning moments of the second half following being up by double-digits in the first half. The Cards had the ability to put the game away and came out relaxed in the second half, allowing the Irish to outscore them 40-31.

As I said before, Dwayne Sutton was active all day on the glass for Louisville but struggled to score, although it wasn’t for a lack of aggression. His mentality is one Chris Mack has applauded Sutton numerous times this season for his sticktoitiveness and motor, saying he wishes he had “13 Dwayne Sutton’s,” and we saw that in action late in the game.

He came into the Notre Dame matchup 12/33 on the season from deep, but when the Cards desperately needed points Sutton provided them and did he so from three.

Without those buckets, I’m not sure Louisville wins. Kudos to Sutton for not shying away from open looks and having the confidence to hit them in a big moment.

What a win means for Louisville and what’s next: A win in ACC play is a win no matter what you twist it and each one is more important than the last. The Notre Dame victory pushes Chris Mack’s club to 13-3 overall and 4-1 in ACC play, good enough for second place behind Duke.

The questions about whether Darius Perry could step up and play a big role, who would step up into an alpha role, amongst others about the mental state of Louisville are still left unanswered, which is rather concerning considering it’s already January.

Louisville will have another very winnable matchup on Tuesday night against Pittsburgh, and once again could put all of this talk to rest with a big win. The inability to finish games is something that has to have Chris Mack scratching his head as the Cards have just about given away every lead they’ve had this season.

There are things to be encouraged about if your Mack, however. Freshman David Johnson provided solid minutes for Louisville, producing five points, three rebounds, two assists, and only one turnover. Steven Enoch had his worst career game and the Cards still won. Ryan McMahon got back to shooting like himself, amongst a few other things. The talent is there. The coaching is there. Now it’s time for team 106 to figure out the stuff “between the ears.”

Next: How the “Super Six” can impact the Cards going forward

Louisville will have a quick turnaround as they hit the road again traveling to take on Pittsburgh, an opponent they’ve already defeated, on Tuesday night at 7:00 PM on the ACC Network.